This event has been canceled.

3rd Thursday Theatre … on the Porch at the Chincoteague Cultural Alliance!

September 16 – Lysistrata
Sarah Ruden’s hilarious modern adaptation of Aristphanes’ Greek comedy
Originally performed in classical Athens in 411 BC. this play is a comic account of a woman’s extraordinary mission to end the Peloponnesian War between Greek city states by denying all the men of the land any sex, which was the only thing they truly and deeply desired. Lysistrata persuades the women of the warring cities to withhold sexual privileges from their husbands and lovers as a means of forcing the men to negotiate peace—a strategy, however, that inflames the battle between the sexes. Ms. Rouen’s  adaptation is a rollicking  rendition in blank verse for dialogue and in lyric meters and free verse for the songs. 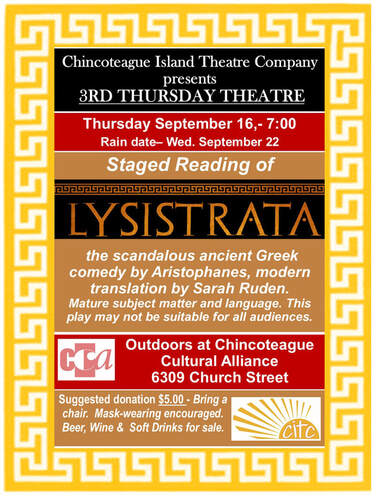 This play contains mature language subject matter.
It may not be suitable for all audiences.:“Misery, woe on woe!
Lo, I brim over with compassion:
You’re foully swindled of your ration!
Forsooth, your guts are going to blow!
How will your nuts remain
Intact? Will you not go insane?
Your manly parts are out of luck
Without their regular morning f…..”