For over 40 years, the NASA Sounding Rocket Program (NSRP) has been one of the primary vehicles for space and earth science research. The program has provided important and often critical data to support the scientific community, NASA’s orbital space programs, the Department of Defense, other Government agencies, and the international space community. NSRP’s more than 2,500 missions have significantly added to our scientific knowledge in galactic astronomy, solar physics, planetary atmospheres, high-energy physics, and other disciplines. These low cost, quick response experiments remain vital to NASA’s mission.

Wallops launches an average of 25 scientific balloons each year. Balloons are launched routinely from the National Scientific Balloon Facility in Palestine, Texas and the Scientific Balloon Flight Facility in Ft. Sumner, New Mexico. Balloons also can be launched from temporary sites. In the past, balloon campaigns have been conducted from Canada, Australia, New Zealand, Antarctica, Alaska and Sweden. Balloons have been used for decades to conduct scientific studies. While the basics of ballooning have not changed, balloon size has increased and their dependability has improved greatly. The Wallops Flight Facility manages the NASA Balloon Program Office, which offers capabilities and benefits for scientific research that cannot be duplicated by other methods.

The Aircraft Office at Wallops provides for the operation, maintenance, configuration control, and mission support of assigned NASA aircraft as well as the planning and conducting of Airborne Science missions. The Aircraft Office has responsibility for several NASA-owned and operated aircraft. The NASA-owned aircraft include a P-3 Orion, one C-23 Sherpa, two C-130 Hercules, and a UH-1 Huey, all of which support the Airborne Science Program and other customer requests. A B-200 King Air is also available to support research flights and Goddard Space Flight Center (GSFC) mission management flights. Additionally, the Aircraft Office conducts airworthiness reviews as required when non-NASA aircraft support NASA scientific missions. 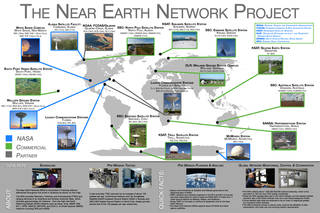 The mission of the Near Earth Network (NEN), https://esc.gsfc.nasa.gov/space-communications/NEN.html, is to use ground-based antennas to provide “best value” direct-to earth communication services for NASA missions operating in the Near Earth regime (zero to two million kilometers from Earth).  The launch of NASA’s new Space Launch System (SLS) for the Exploration Mission -1 (EM-1) in 2018, giving NOAA the ability to observe North and South America and surrounding waters in near-real time, and resupplying the International Space Station are just a few of the 40 space exploration and science missions that NASA’s NEN enables.  NASA missions are not complete unless the science observation and spacecraft health data, is returned to the earth and processed.  There are no internet hook-ups, phone lines, or fiber optic cables in space to route the data to earth.  That’s where the NEN comes in.  The NEN provides Telemetry, Tracking and Command (TT&C) services for orbital missions and occasionally sub-orbital missions.

The Small Launch Vehicle Research (SLVR) Project is a Wallops effort to develop and provide a comprehensive, end-to-end payload preparation, integration and test, launch and on-orbit support capability for small payloads. Although progress has been made around the country in specific areas, the US currently as no low-cost, routine access-to-space capabilities for small payloads.To enable this complete end-to-end capability, Wallops is working to integrate six focus areas for these small payload customers that need to place 4-400 lbs. in LEO.